Out of the article that was written by Adil Melendez and Ron Rosenhart in CCHRreview:

In July 2016, the UN special rapporteur on the rights of indigenous people expressed her concern about the systemic violations that indigenous communities are facing in Honduras. Among other findings she concluded that there is a lack of protection of the indigenous lands and natural resources, which, in combination with corruption, impunity, limited access to justice and poverty caused by enormous inequality, leave the indigenous practically defenceless against violence committed by several actors. These aggressive actors, as pointed out by the Interamerican Commission on Human Rights in its 2019 report, among others include police, (para)military forces and representatives of private companies.

When Berta Cáceres, indigenous human rights activist and leader of Consejo Cívico de Organizaciones Populares e Indígenas de Honduras, became aware of the plan to construct and operate a water dam in the Gualcarque river - sacred to the Lenca-community of Río Blanco - she and her organisation resisted. Despite her internationally acknowledged reputation as advocate of Lenca-rights and suppressed communities across the world, on 3 March 2016 she was assassinated by order of Honduran private company Desarrollos Energéticos S.A.: the company responsible for the construction and future operation of the dam. A company financed by European companies such as Finnish investment firm FinnFund and Dutch development bank FMO. Such financial support was crucial for the future of the project and thus an indispensable element for the escalation of the Agua Zarca conflict. Without financing there was no project. Without a project, there was no conflict. Nevertheless, the financiers have so far refused to accept any form of responsibility in relation to the conflict and the assassination of Berta Cáceres and five other Río Blanco community members.

Within the conflict surrounding the Agua Zarca dam project, among the aggressors of the conflict the prospect of financial benefits weighed heavier than their willingness to the respect and protection of human rights, including the right to free prior and informed consent, and the rights of indigenous people, culture, water and even life. In 1994, the Honduran State acknowledged a set of international norms (the earlier mentioned Convention 169 of the International Labor Organization) designed to assure prior consent of local communities and avoid the repression of the original inhabitants of the relevant lands. Nevertheless, a combination of (foreign) corporations, banks, governmental bodies, politicians, and (para)military groups, proved to be a deadly combination capable of dodging due compliance with (international) regulations and respect towards the rights of the original peoples of Honduras. The conflict arising basically came down to this: political influence, financial means, violent groups, large pieces of land, commercial opportunities and bad intentions on the one side, and a protesting unprotected group of original inhabitants without access to justice on the other.

Global Justice Association represents the family and Lenca indigenous organization of the assassinated Berta Caceres in the lawsuit against the Dutch Development bank, FMO in the Netherlands with a claim to have violated the duty to care in the financing of the Dam project. The bank has been warned multiple times and years before by amongst others Berta herself that the project lacked proper consultation by the indigenous and that it was a violence ridden project.

The lead attorney for this case in the Netherlands is Wout Albers.

Podcast "Blood River" about the killing of Berta Cáceres, produced by Bloomberg 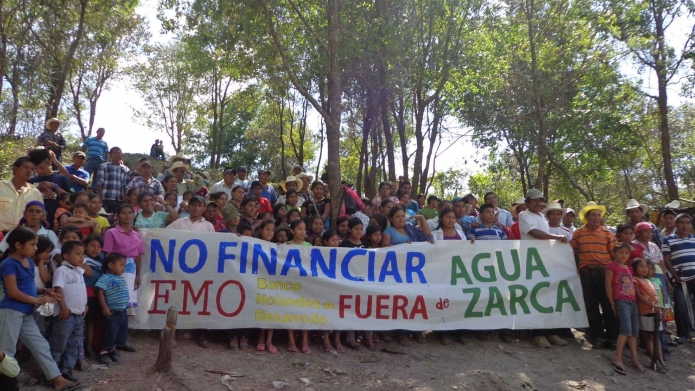 The indigenous community in Rio Blanco, the Lenca have been protesting the Agua Zarca Dam since the beginning and have never given prior consent to the building project. Despite the protest, the project moved forwards including funding by the FMO.